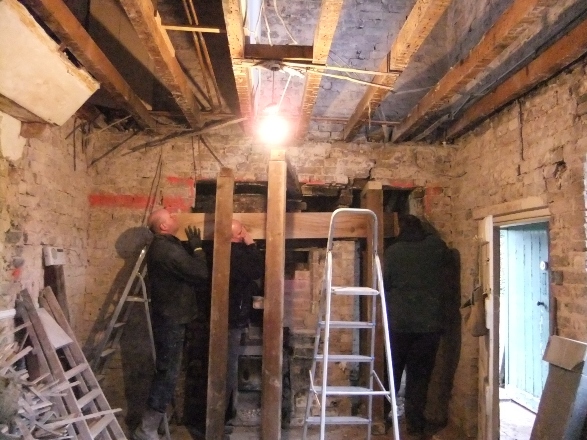 Having just done a piece on Keith it is only fair to do one on Mark (and to let you in on a little secret they both hate it!). As illuded to before Mark and Keith are the driving force behind the company, where Mark looks after the support side of the business. Like Keith, Mark always has a smile on his face and might seem to be the quieter of the two but is always there with a dry comment that always goes to the heart of the matter. Outside of Marches, Mark is doing up a Georgian house where his long-suffering wife Liz is hoping one day it will be complete (he’s the one on the left in the photo supporting the oak lintel) as well as also cheering on the mighty Bridgnorth rugby team - North Midlands Cup Winners 18/19 he will have you know!

Mark’s a trained mechanical engineer with a BSc from Preston Poly, from which he joined the family business becoming the highest academically qualified pipefitter in the midlands and had some great times installing draught relief plants in the south west over several summers.

He then joined Purac as a proposals engineer in their Minor Works department again spending a lot of time in the south west, then moved through project management and discipline lead positions to head up tendering for the water division with a £1M per week target for order intake. Purac became Enpure and in their diversification into municipal solids waste and subsequently gasification had some interesting times with a whole new supply chain.

When the Enpure name was resurrected by Korean giants Doosan Mark joined an initial 12 strong team to start the re-build and had to travel a little more globally with a particularly memorable conversation with the office whilst in Saudi that started with “Whilst you’re in the middle east…” and ending in a whistle stop visit to Oman on the way back.

So eventually after all this globetrotting Keith gave him a call and asked if he liked to join him in Marches in a wonderful part of the world, that we know as Ludlow. He jumped at the chance and has been with us ever since.

So what’s clear is that the managers of Marches love engineering and if you see a tired looking Mark you will know why he’s just thinking about all the future projects Liz has for the house, ponds, summer house, pizza oven, etc.